Finding stocks that can multiply wealth as much as 100 times the original cost of investment, is the holy grail of investing.

But to find and own such stocks, one must remember that money is not made in buying and selling, but in holding.

‘If you aren’t thinking about owning a stock for ten years, don’t even think about owning it for ten minutes.’

Usually, a stock becomes famous for two reasons, one because it has given exceptional returns and the second reason being a stock’s freefall.

Whenever there’s a massive surge or fall in a particular stock, everyone hears about it. Headlines speak of Rs ‘X’ lakh invested becomes so and so or Rs ‘X’ lakh crore wiped out.

While there were sad stories of DHFL, Vakrangee and PC Jeweller, the stock market also provided multiple opportunities for investors to become a millionaire or even a billionaire.

Those who were sitting tight and holding high-quality stocks during tough times would have earned massive returns on their investments.

Let’s take a look at four such companies which turned Rs 1 lakh of investment into more than Rs 1 crore in the last 10 years.

Once a little-known company, Tanla Platforms has multiplied investor wealth by over 300 times in the last ten years.

If one had invested Rs 1 lakh in it ten years ago, he/she would have become a crorepati today with over 3 crores in wealth. 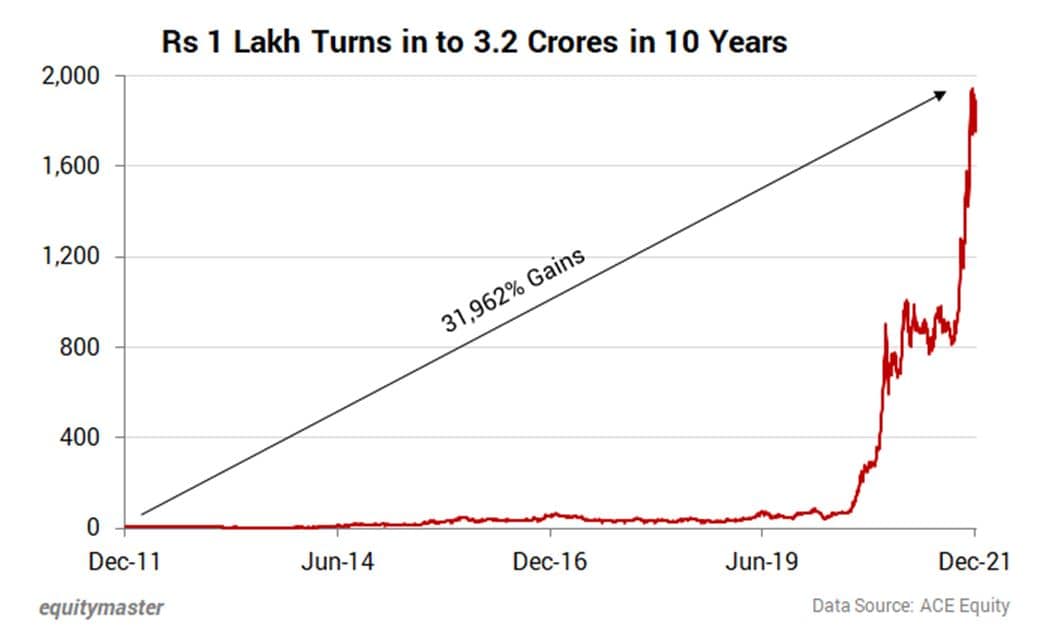 This is not the first time the company’s shares are on a meteoric rise. The stock was trading at around Rs 5 in March 2014 but by December next year, it moved to Rs 50 backed by strong revenue growth in fiscal 2015.

So what does this company do? Tanla Platforms is a cloud communications provider enabling businesses to communicate with their customers and intended recipients. It’s a global A2P (application to person) messaging platform provider.

The company has an almost monopoly in the OTP business.

Tanla Platforms has been around for years but the massive rally post pandemic brought the stock to limelight. It started reporting higher revenues and profits from September 2020 quarter. But the good quarterly results are not the only thing which triggered the rally.

The company made acquisitions and diversified its revenue stream by looking at overseas clients.

Backed by strong earnings, bullishness by foreign and domestic investors and the company being a leading player in a fast-growing market, Tanla Platforms has come a long way from 2000 till now.

Alkyl Amines had a marketcap of less than Rs 100 crore in 2010-11. Barely 11,000 shares traded on a daily basis during that period. The stock was priced well below Rs 50 and traded at a price to earnings ratio of 7 to 8 times.

If you had invested Rs 1 lakh in the company back in December 2011, your wealth would have multiplied over 215 times by now. 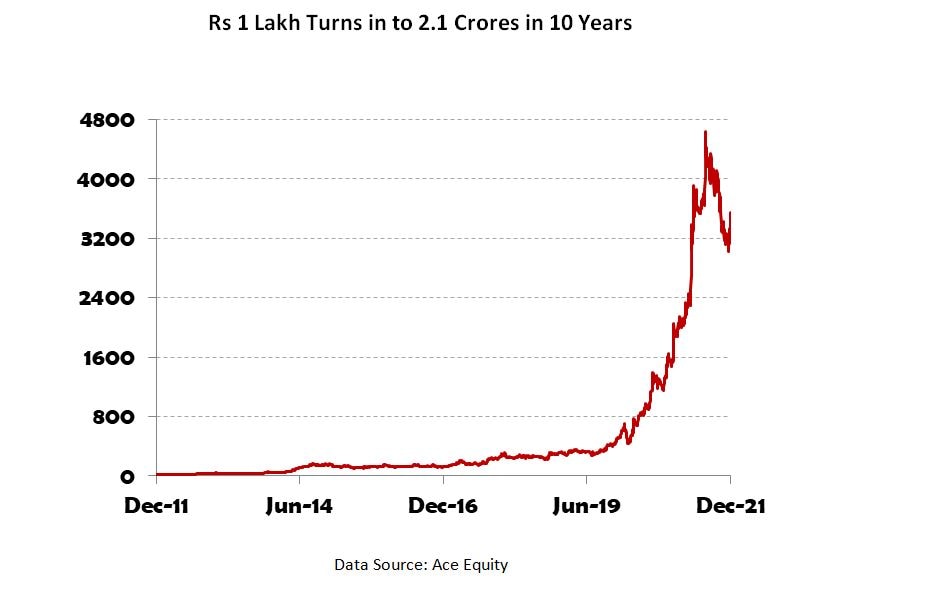 For Alkyl Amines, the major gains have materialized in last one year itself, when the stock got the push from rerating in its P/E multiple and growing liquidity. 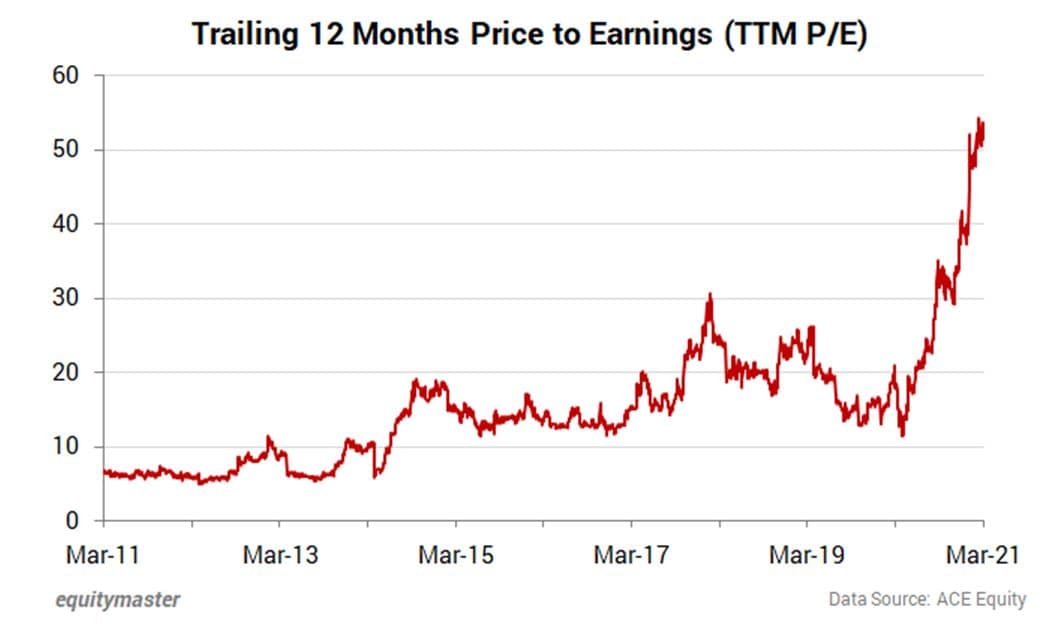 As most global customers reduced their dependence on China, and focused more on India, specialty chemical companies were the biggest gainers.

Alkyl Amines was the first company in India to make amines. It derives major revenues from pharma and agrochemical customers.

The company has three manufacturing sites with 12 production plants, related utilities at Patalganga and Kurkumbh in Maharashtra and Dahej in Gujarat, and a R&D centre at Hadapsar, Pune.

Over the last decade, the company has added several new product processes developed at the R&D centre to expand its product range.

Alkyl Amines has a pipeline of over 100 products. It’s the market leader in the ethylamine segment and is among the foremost manufactures of methylamine, diethyl hydroxylamine, and dimethylamine hydrochloride (DMA HCL) in India.

It also has a significant presence in the international market for its reliable service and quality products.

Coming to the company’s financials, Alkyl Amines has consistently reported increasing revenues and profits for the past 10 years. 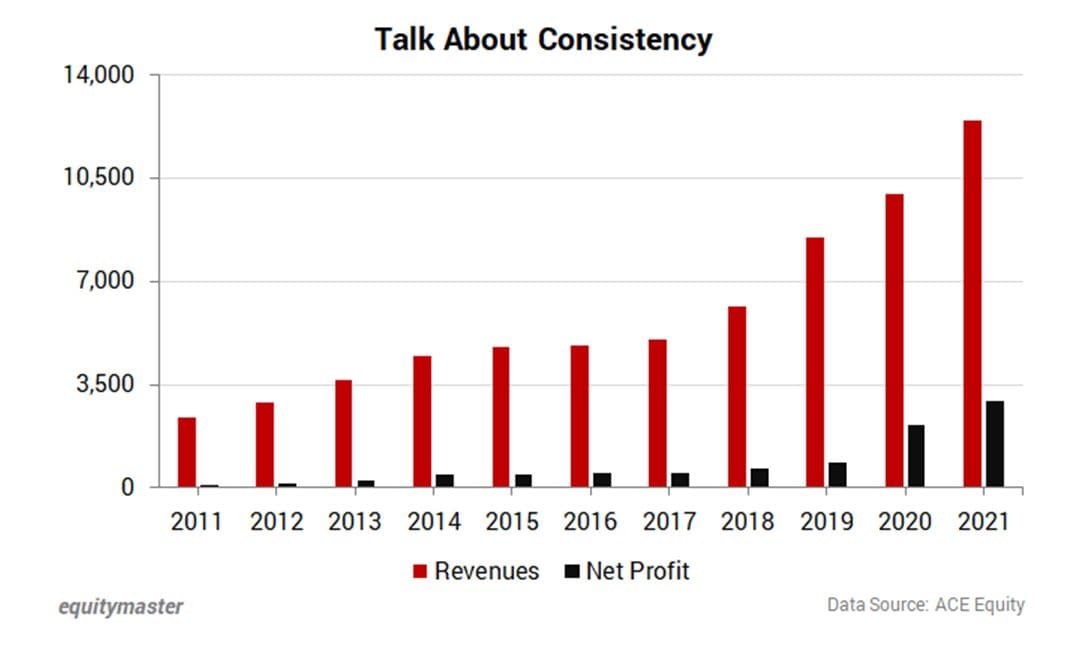 Deepak Nitrite is a leading manufacturer of organic, inorganic, fine, and specialty chemicals. It also manufactures a wide range of intermediates for use in industrial explosives, paints, cosmetics, polymers, optical brighteners, and others.

It’s a market leader across various segments, having around 70% market share in sodium nitrite, sodium nitrate and NitroToluenes in India.

Deepak Nitrite’s success story started in 2017 when China’s crackdown on polluting units caused a disruption in supply. This presented a unique opportunity for chemical companies to take on China’s dominance.

Deepak Nitrite has been getting all things right since then. It launched new products, diversifying the business, focused more on exports.

As global companies started to reduce their dependence on China, it changed the fortunes of many chemicals companies in India, one of it being Deepak Nitrite.

Deepak Nitrite was quick enough to foray into the manufacturing of pharma grade Isopropyl Alcohol (IPA). This is an intermediate chemical used to manufacture sanitizers. As the demand for sanitizers grew, the company set up a separate plant at its Dahej manufacturing complex.

A key worry for the company was its increasing debt. However, the strong operational performance posted by the company in the past two years brought down its debt significantly. From having a debt to equity ratio of 1.58 in March 2015, the ratio currently stands at 0.25.

Posting consistent growing financials is common for 100 bagger stocks and similar is the case for Deepak Nitrite. Have a look at the chart below which shows the company’s revenues and profits over the years. 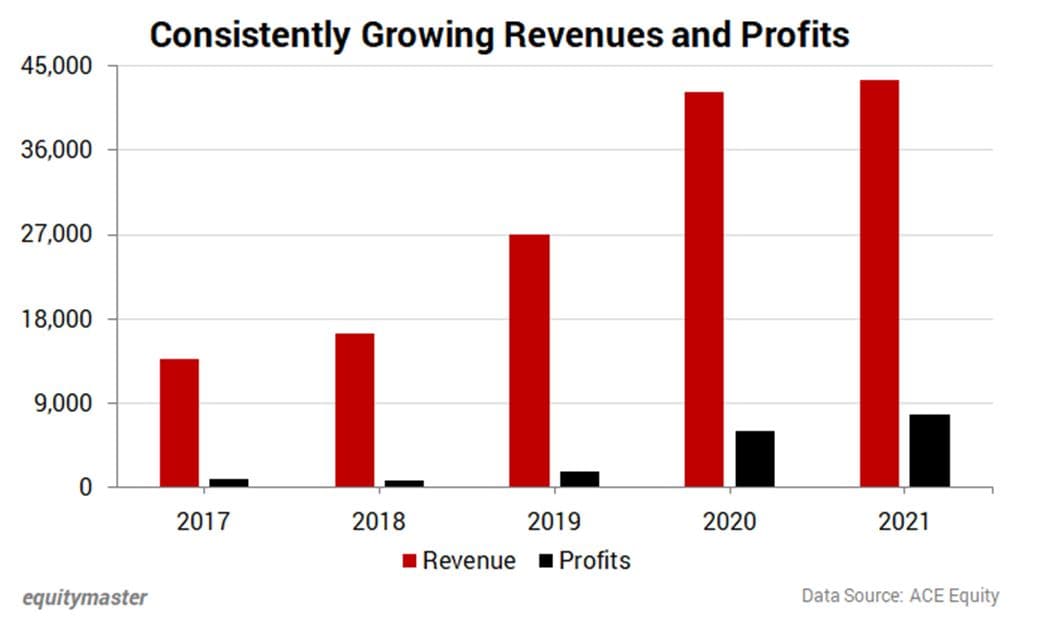 Coming to wealth creation, shares of Deepak Nitrite were trading at a mere Rs 15, 10 years ago. Skip forward to today, shares have zoomed to Rs 2,500 levels.

That’s a massive wealth creation. If you would have invested Rs 1 lakh in the company back in December 2011, you would be sitting on handsome profits of Rs 1.5 crore! 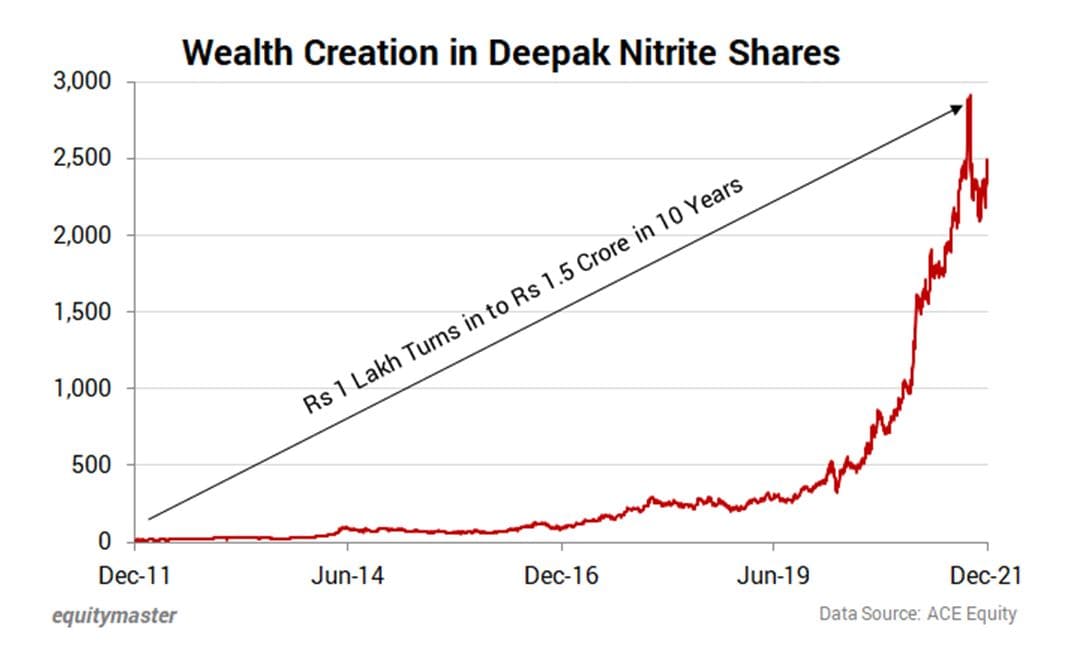 With India looking to become one of the world’s largest exports for chemicals, the success story of Deepak Nitrite is far from over.

Investing Rs 1 lakh in Minda Industries back in December 2011 would’ve made you a crorepati by now.

Minda Industries, the flagship company of the N.K. Minda Group is one of the most diversified auto component manufacturers in India. It’s a technology leader in the auto components industry and a leading tier-1 supplier of proprietary automotive solutions to OEMs.

Its market leadership is noteworthy. The company is the largest switch player in India and the second-largest globally in horn segment. It’s also the third-largest automotive lighting player in India.

The company’s focus on the automotive sector has made it eligible to ride the growth on multiple fronts. For example, between 2012-14, when everyone was going crazy over the solar hype, Minda group too invested in it, only to realise later that wasn’t cup of their tea. The group immediately exited the business and since then, focused solely on automobiles.

While the company tasted success between 2014 to 2018 when its stock price skyrocketed, the real gains came post April 2020 when the markets factored in the EV adoption factor.

As we began to see cyclical recovery in the two and four-wheeler segments, Minda Industries gained market share. Its foray into new product – sensors, helped.

By entering into several JVs and technical collaborations with foreign players, Minda has expanded its product portfolio. The collaborations include Kosei for alloy wheels, Tokai Rika for switches, seat belts and gear shifters, AMS for lightings, Kyoraku for blow-moulded components, Toyoda Gosei for air bags, rubber hoses and sealings, Denso Ten for infotainment systems, Katolec for printed circuit boards and many more. The key to identify multibagger stocks…

As a retail investor, if you are looking for multibagger stocks in India, you should weigh in all the pros and cons before investing in any company.

The goal of an investor should be to look for a good investment and not necessarily a multibagger. This is because you need to have a thorough process for investing that meets all your criteria.

If you go in with the assumption that every stock you invest into will be a multibagger, you will be disappointed. It won’t work out that way.

The future is uncertain. Your rationale for buying a stock may change. You will have to watch out for that.

The idea should be to buy a good quality stock of a company, look out for a business that has a solid foundation, sound growth strategy, attractive valuations, ethical business practices, and exceptional management team.

As long as these factors are in place, you should remain invested for the long haul rather than being agitated by short term market volatility and price fluctuations.

Take a look at the stock price charts of all the stocks mentioned in this article, and you will see that most of the gains have come in the past 18-24 months.

Therefore, to make big money in this space, you need to have the patience for phases when nothing spectacular happens. You should be fine being bored and accept the volatility that lesser known stocks might face in the early stages.

You may lag in the short term, but the wealth you will earn in the long term will go a long way.